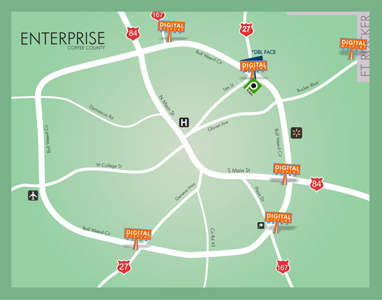 Digital Billboards have brought Out-of-Home advertising to a whole new level. Digital technology allows you to display multiple messages. Plus, with messages that are easily changed, you can display different ads on specific days as well as at different times of the day, making your message not only relevant but timely. With the latest eye-catching LED technology and multiple locations, Durden Outdoor is proud to introduce our NEW DIGITAL NETWORK to the Enterprise area. With seven different locations, more than 180,000 vehicles passing them daily and the ability to rotate to different locations every four weeks, the Durden Digital Network is the only network of it’s kind in the Enterprise Market. The Displays in the Enterprise Digital Family are listed below: Durden Outdoor Displays is the only electronic, Outdoor-sign vendor able to accommodate an audience in the Wiregrass area with a network of unavoidable LED billboards – with many new electronic LED billboards going live in the coming months! Our current Network covering the Wiregrass consists of more than 20 digital billboards scattered throughout Dothan, Enterprise, Ozark and Eufaula and offers local advertisers multiple opportunities to get their brands up in lights!
https://www.durdenoutdoor.com/wp-content/uploads/2016/06/DUR-Footer-Logo.png 0 0 Amy Riddle https://www.durdenoutdoor.com/wp-content/uploads/2016/06/DUR-Footer-Logo.png Amy Riddle2013-06-12 17:26:392013-06-12 17:26:39DIGITAL BILLBOARD NETWORK IN ENTERPRISE, AL

Whitaker Marketing came to Durden Outdoor with the idea of collaborating to promote their client Espy, Metcalf & Espy, P.C.   Known as Dothan’s bankruptcy lawyers, EMEPC, have more than 60 years combined in bankruptcy law, and have helped thousands of individuals and families escape or decrease crushing debt burdens. The design process of Espy, Metcalf & Espy began with several creative meetings researching the topic, defining the direction, and strategizing about the possibilities. This is when the “Ball & Chain” concept emerged from our creative minds and leapt onto the dry erase board. The expression “ball and chain” refers back to the actual ball and chain, which was a heavy metal ball secured to a prisoner’s leg by means of a chain and manacle. The ball and chain was in use in both Britain and the USA by the early 19th century (and possibly much earlier.) The earliest citation in print is from The Times, January 1819. Now, it is used as a slang term for a burden that you must carry around with you. In our design the “Ball and Chain” is a metaphor for how debt can be a burden and weigh you down. With the design sketched out, Durden’s Creative department began designing and revising the billboard. After a few ideas were mapped out the initial design was presented to the client for review. Once the concept was given a go-ahead the 3D idea developed while meeting with Durden’s production department. Excitement had sprung with this new 3D idea between all three entities! The artwork was approved and the agency decided to creatively spend their client’s ad budget on (1) stationary bulletin strategically located on Main Street in Dothan, Alabama [across from Wiregrass Church.] To add frequency and coverage to this “MY DEBT” ad campaign, they also included a digital rotary showing on our Durden Digital Network. The team at Durden then began engineering and building the 20 foot 3D Chain and Cuff to fit on the billboard. You can see how we made it by clicking HERE. Shortly after it was installed Sharon Whitaker, President of Whitaker Marketing, notified us that the client had already received a lot of positive feed back from their 3D billboard. Creating the RIGHT IDEA for the RIGHT CLIENT equals “FAMOUS” every time.   Durden Outdoor was beyond ecstatic about developing and producing this billboard campaign for Whitaker Marketing and  Espy, Metcalf & Espy, P.C.’s Bankruptcy Practice. To find out how to add a 3D PROP BILLBOARD to your next marketing campaign, contact one of the FAMOUS MAKERS at DURDEN OUTDOOR today at sales@durdenoutdoor.com.
https://www.durdenoutdoor.com/wp-content/uploads/2016/06/DUR-Footer-Logo.png 0 0 Amy Riddle https://www.durdenoutdoor.com/wp-content/uploads/2016/06/DUR-Footer-Logo.png Amy Riddle2013-06-03 19:33:132013-06-03 19:33:13Durden Designs 3D Billboard for Local Bankruptcy Firm