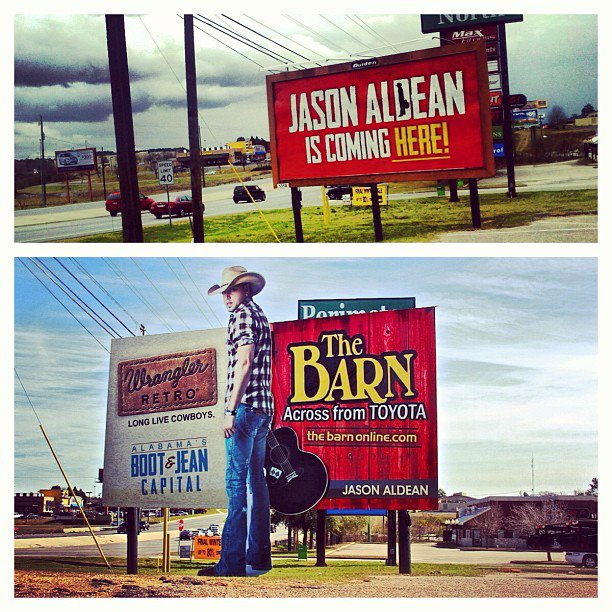 The power of one billboard can be huge if the message is right.  Durden Outdoor teamed up with local Wrangler retailer THE BARN for this awesome TEASER | ANSWER board.

THE GOAL:  The client wanted to let locals & through traffic know that they are the BOOT & JEAN Capital of Alabama.

THE IDEA:   Build a 25 foot tall cowboy (in jeans) and put him on a billboard smack dab in the center of Dothan, AL.

THE SIZZLE:  The 2013 TOADLICK Music Festival was approaching April 11,12,13 and THE BARN was a sponsor of the event.  We spoke to the festival promoters and they had tried to book country music star JASON ALDEAN because of popular demand, but were unable to book him for their 2013 event.  So, how cool would it be if THE BARN could bring him to town? J

THE TEASER:  We put up a billboard for 4 weeks that simply said “JASON ALDEAN IS COMING HERE.”

THE ANSWER:  Our production team designed, built and installed a 25’ tall JASON ALDEAN on a low height billboard located on a major through fair (Hwy 231) in Dothan, AL with 38,000+ cars per day.

THE RESULT:  Huge Local Response & PR for our client.

NEXT QUESTION:  How can TEAM DURDEN make your next campaign FAMOUS?

Jason Aldean has set the stage in country music. The singer has sold more than 7 million records and went double platinum with his 2010 album “My Kinda Party.” The recent release of his new album Night Train has everyone buzzing. His first single from this album, “Take a Little Ride,” has hit a three week streak at No. 1. You can read more about him on his website www.jasonaldean.com.

The Barn, a local business, has been providing western and casual clothing to the surrounding area for more than 30 years. They carry top brands of clothes, shoes, boots, hats, and accessories for the entire family. With Jason Aldean being the face of Wrangler jeans, The Barn decided they wanted to be a part of all the hype.

The Kreative team at Durden designed a campaign to market their products successfully. The Durden rotary poster, displayed for a couple of weeks, next to Conestoga Steak House on HWY 231 N, kept the Wiregrass pondering and curious about the artist’s where-abouts. Through social media motorists have been trying to find the answers. Will Jason Aldean come to Toadlick? The Durden team knows what he is up to. Stay tuned!