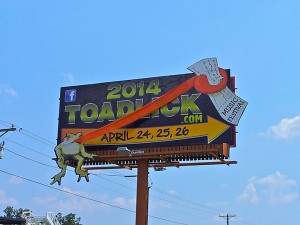 For the second year in a row, Durden Outdoor is proudly sponsoring the Toadlick Music Festival. The festival, in its third year, drew 40,000 music fans in 2013. “Toadlickers” came from 40 states and 10 foreign countries, all-eager to see some of the biggest names in country music. The 2014 music festival is expecting to have their largest crowd in its three-year history.

Toadlick is an affordably priced B.Y.O.B. (Bring Your Own Booze) festival that offers free admission to children 12 and under. This year you will be able to see many big name bands as well as local bands. 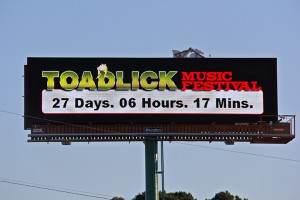 To help promote the Toadlick Music Festival, Durden Outdoor utilized multiple digital billboards in their digital billboard network to feature the top music artists that will be performing in April of 2014. Durden’s Creative team also developed (in-house) a custom-built, 3D, 30-foot toad tongue at the festival ground’s billboard. You can see the toad’s tongue from ten miles down the road snatching up its tickets for the festival.

If you are interested in more information or tickets for the Toadlick Music Festival Please click here.