Durden Outdoor Displays, Inc. is Southeast Alabama’s leader in outdoor marketing. Durden has been in the business of making people famous since 1968. With a marketing network of 1000 plus bulletin, poster, and full color digital displays your message can be effectively promoted with Durden Outdoor.

The Durden headquarters is located in Dothan, Alabama in a 60,000 square foot facility. Our team has the ability to create, design, and manufacture on site. The award winning Durden Kreative Team works directly with the client to ensure the message fits the promotion to help maximize return on investment. The Durden Kreative Team has an understanding of marketing versus advertising. While some may consider them the same we view them separately. Advertising is pushing a product for short term market gains. A well designed marketing plan can achieve short term market share gains while establishing a brand image in the community.

If you would like to see your business’s bottom line increasing be sure to contact one of our marketing consultants today. We can build a comprehensive marketing plan to make your business “Famous” in the Wiregrass area. Remember there is more to advertising than simply putting a sign up. The professionals at Durden Outdoor can help you put together an effective marketing campaign where you can benefit from short term gains and more importantly show results over the long term. If you would like to read more about our outdoor marketing network be sure to see our solutions section. 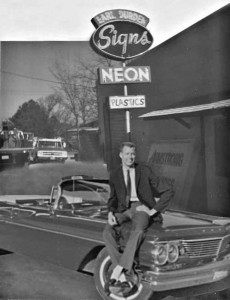 In 1959 Earl Durden began working for his cousin Foy Ready at the “Heart of Dothan” hotel in downtown Dothan, Alabama. 2 years later, cousin Foy decided to buy a local sign business to service his motel billboards & signs. He would work four days at the hotel and one at the sign company; serving as an assistant until he finally made his way up to journeyman. Earl learned the trade and began preparing for a future of his own. In May of 1968 he created “Earl Durden Signs” along Route 1 in Ashford, Alabama. Earl would unplug the only high voltage appliance in the house, his grandmother’s stove, for power to his used welding machine. By August of the same year he was able to purchase his first truck from Solomon Chevrolet.

“Let us go unto Dothan” 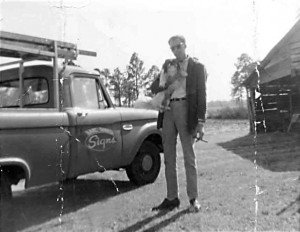 In 1969, with a move to Reeves Street in Dothan, he purchased his first crane. But the stay at Reeves Street was short-lived. By 1972, Earl saw the need to expand and moved the business to its present location along Highway 431 just outside of Dothan, known today as the “Spanish Acres” development. Owning only 35 to 40 billboard structures at that time, Earl opted to sell the company. By 1973 he was back on his feet with a new logo and name change, “Durden Signs”. Business was good and prompted growth once again taking the building from 3,200 square feet to 8,000. And, it was time to grow again. Earl began rebuilding his outdoor media business changing the name to “Durden Outdoor Displays” and, in 1978, he wanted to build the largest billboard in the state south of Birmingham. The “unipole” structure alone would weigh 18 tons and require a 36-inch pole. During this time, many lenders were not in favor of making loans for billboards. Durden shopped bank after bank and finally convinced a locally run bank in Headland, Al to give him a small loan. This jump started the young entrepreneur’s vision into the billboard business once again.

Back to the Bank

Then, in 1986, it was back to the bank, but this time it wasn’t for a single sign. This time he would purchase his competition and double the size of his company. With the purchase of Gulf Outdoor Advertising, Inc., on June 1, 1986, Earl increased his outdoor billboard market to nearly 900 paint and poster faces. He began an extensive renovation program to update older billboards and then he did something many in his business would have thought insane; he began removing over 200 billboards from overbuilt areas.

Today, a visit to Durden Outdoor Displays, Inc. will find a 60,000 square foot facility housing a full service art, marketing & production company. The company owns and manages over 1000 bulletin, rotary poster and digital faces across 9 counties in Southeast Alabama and 1 in Florida. You will also find Earl’s only son Bill acting as Vice President and Creative Director. When asked in what year he began working for the company, Bill’s response is “1976,” which also happens to be the year he was born. Where Earl is more “form and function,” Bill is all about creativity & marketing. Bill’s approach focuses on image. His belief is that we do not just sell signs; we educate the masses about our client’s services in a creative way. The goal is all about seeing who we can “make famous” today.