You are here: Home / / 2019
JULY and AUGUST rank as two of Alabama’s highest traveled months. Reach thousands of drivers in multiple traffic patterns with one of (3) Digital Billboard Blitz’s on our exclusive Digital Network. During the months of July and August, book one of our popular 6 day digital blitz’s and you will receive (2) FREE Gulf Coast Jam tickets ($300 Value). Rock out with Tim McGraw, Jason Aldean, Kid Rock and many more! Your ads must be booked and pick any 6 consecutive days by August 31st for your ad to run on 5, 8 or 11 digital billboards in any of our 6 Wiregrass markets! The Durden Digital Network is the largest digital billboard network in Southeast Alabama. We offer our clients access to 30 Digital Billboard Locations reaching over ONE MILLION+ cars daily in Dothan, AL Ozark, AL Eufaula, AL, Enterprise, AL, Troy, AL, and Marianna, FL. **Supplies are limited and only awarded with packages greater than $1265.00. Tickets are subject to availability at time of contracting.** 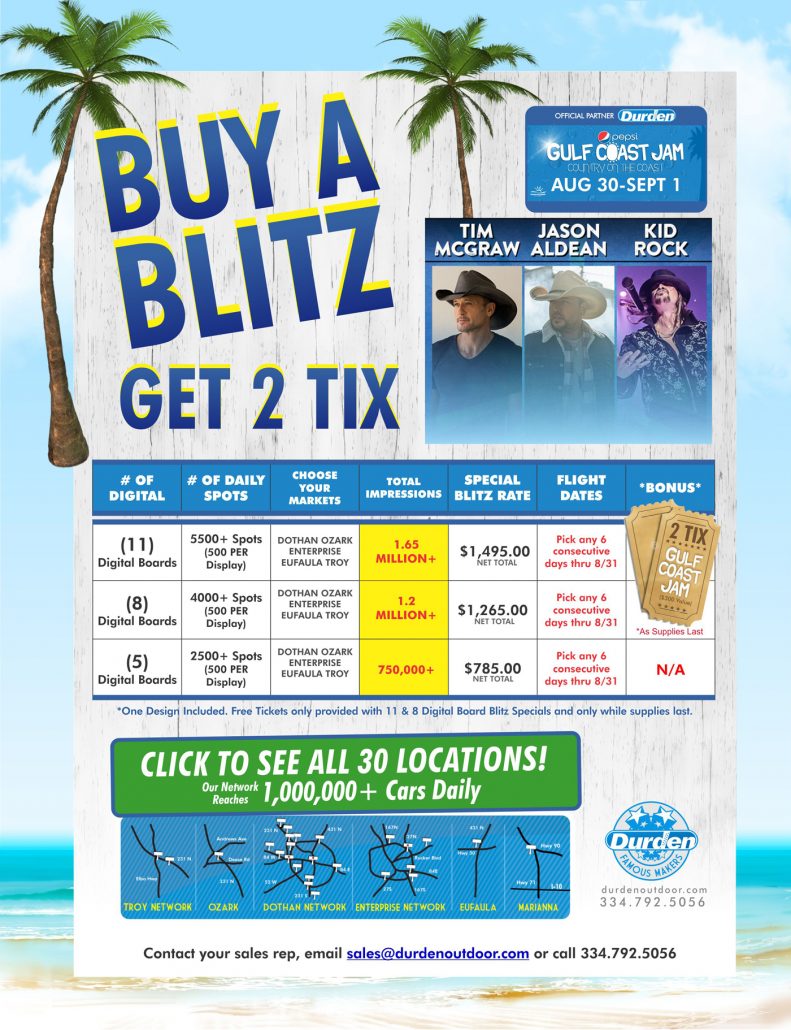 As Southeast Alabama’s leader in outdoor advertising, Durden Outdoor Displays, Inc has been making clients famous since 1968. With a marketing network of 1000 plus billboard, poster, and full color digital displays, your message can be effectively promoted with Durden Outdoor.
https://www.durdenoutdoor.com/wp-content/uploads/2016/06/DUR-Footer-Logo.png 0 0 Amy Riddle https://www.durdenoutdoor.com/wp-content/uploads/2016/06/DUR-Footer-Logo.png Amy Riddle2019-07-23 18:55:162019-07-23 19:43:15The Gulf Coast Jam Blitz IS BACK!!! Buy a Blitz, Get 2 Tix!
It’s not everyday that you see a team of beavers trying to steal the show, but in Dothan, AL it is. The FAMOUSMakers are excited to partner with Brunner, an innovative advertising agency, to bring to life Great Southern Wood’s new “Woodland’s Most Wanted” campaign. Great Southern Wood, located in Abbeville, AL, has always been a staple and known nationally for their YellaWood brand pressure treated pine. The new advertising campaign is an extension of their 2018 “Five-Star Backyards” campaign, which inspires DIYers to build their dream backyard. “Through the use of non-traditional YellaWood fans, in this case, a team of beavers, we’re taking a humorous approach to establishing the desirability of YellaWood brand products,” said Chief Marketing officer James Riley. “It’s a fun and engaging way to encourage homeowners to create their own Five-Star Backyard and to demand pressure treated pine with the little Yella Tag.”

This national advertising campaign launched in March 2019 and includes billboards, print, digital, broadcast and in-store signage. For the bulletins, Brunner incorporated 2-dimensional pop outs of the beavers to give it a more realistic feel. The Team at Durden Outdoor loves working with clients and agencies to showcase award-winning creative through outdoor. If you are interested in becoming FAMOUS in the Wiregrass and would like more information on how we can include a 2-D pop out in your outdoor, give us a call today at 334-792-5056 or drop us a line at sales@durdenoutdoor.com. And remember, if it doesn’t have the yella tag, you don’t want it. 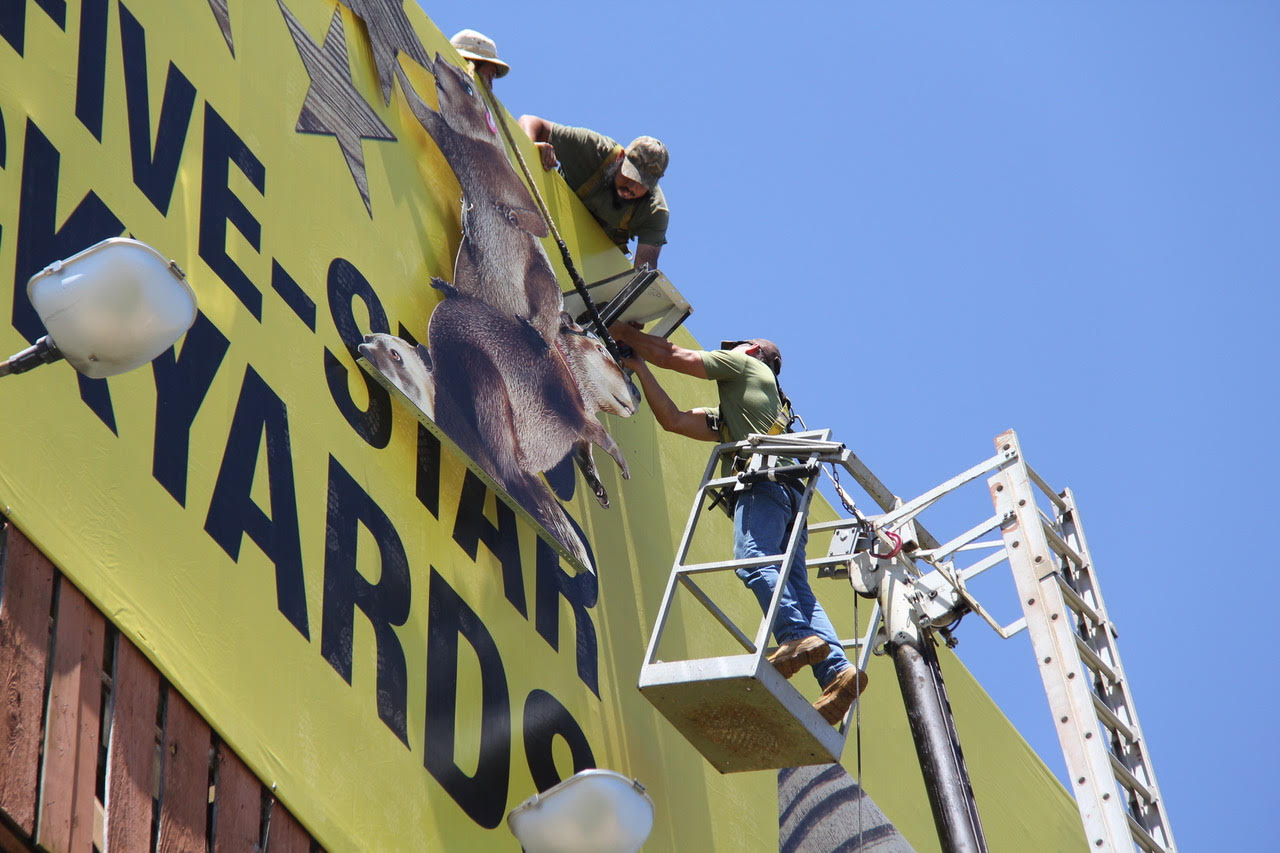 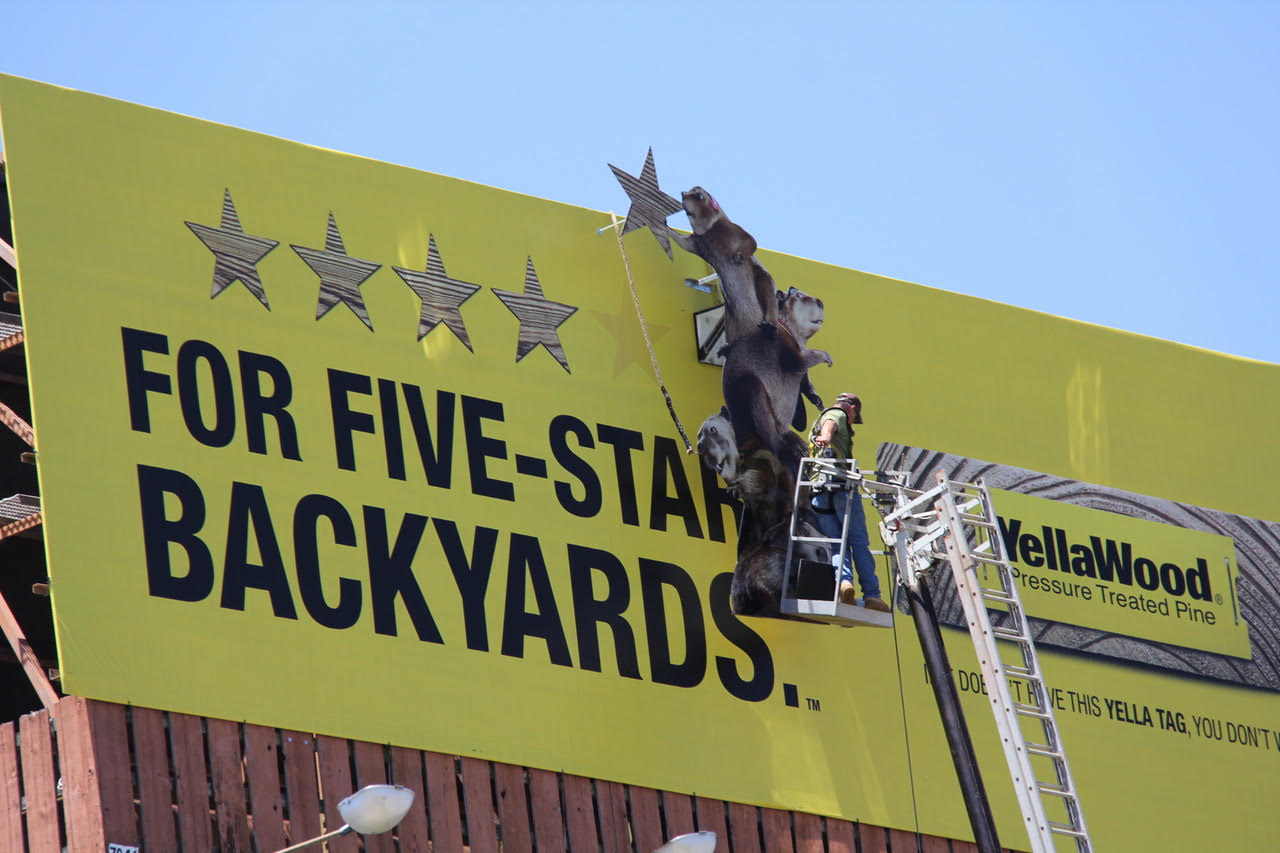 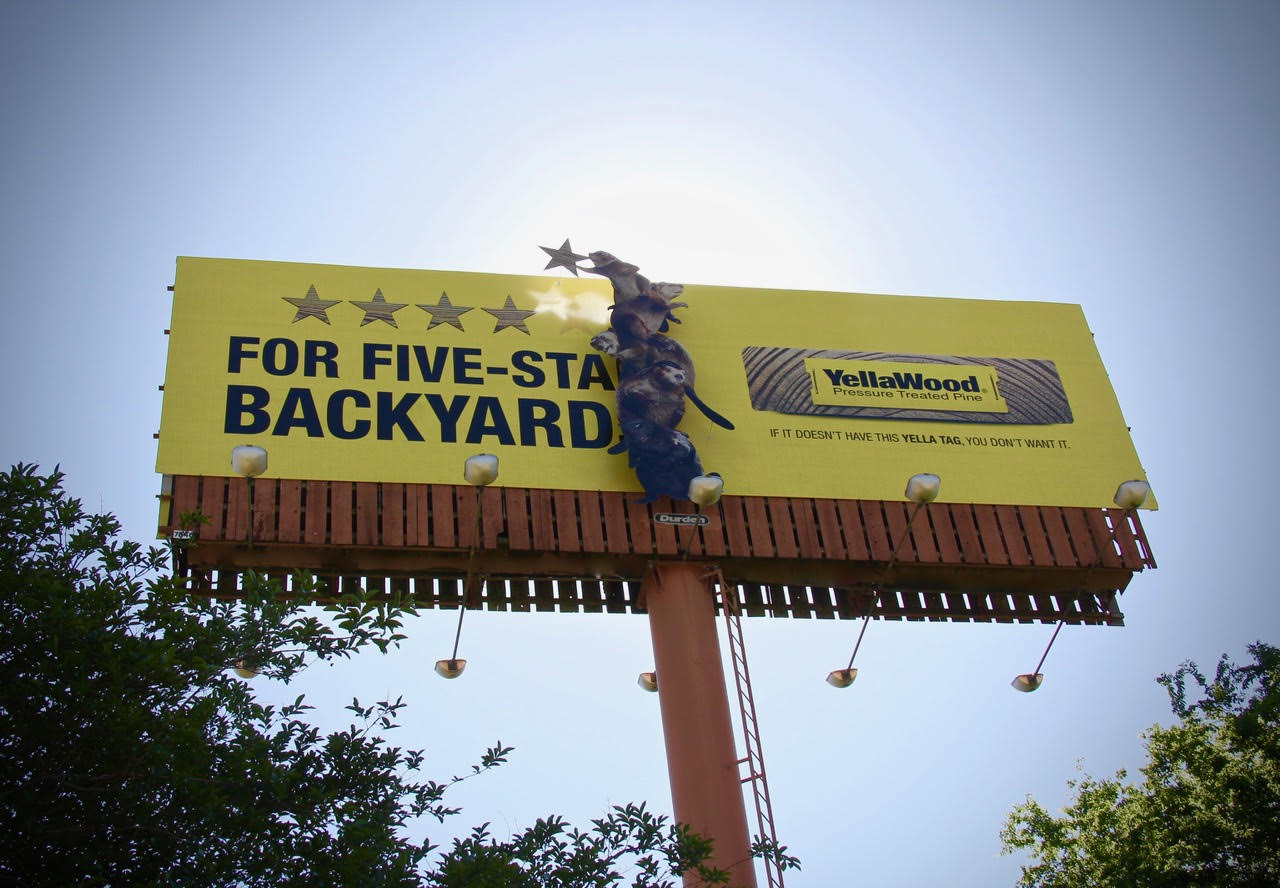 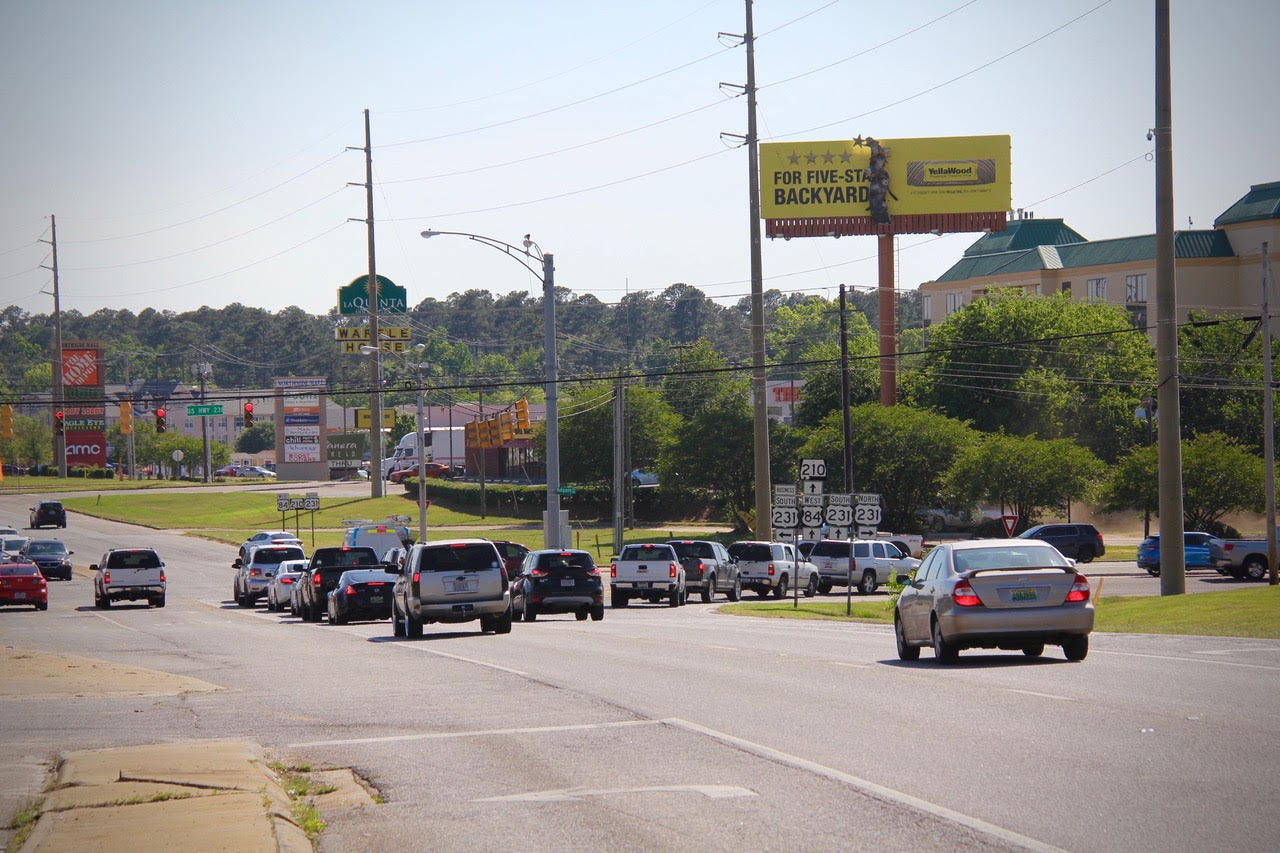 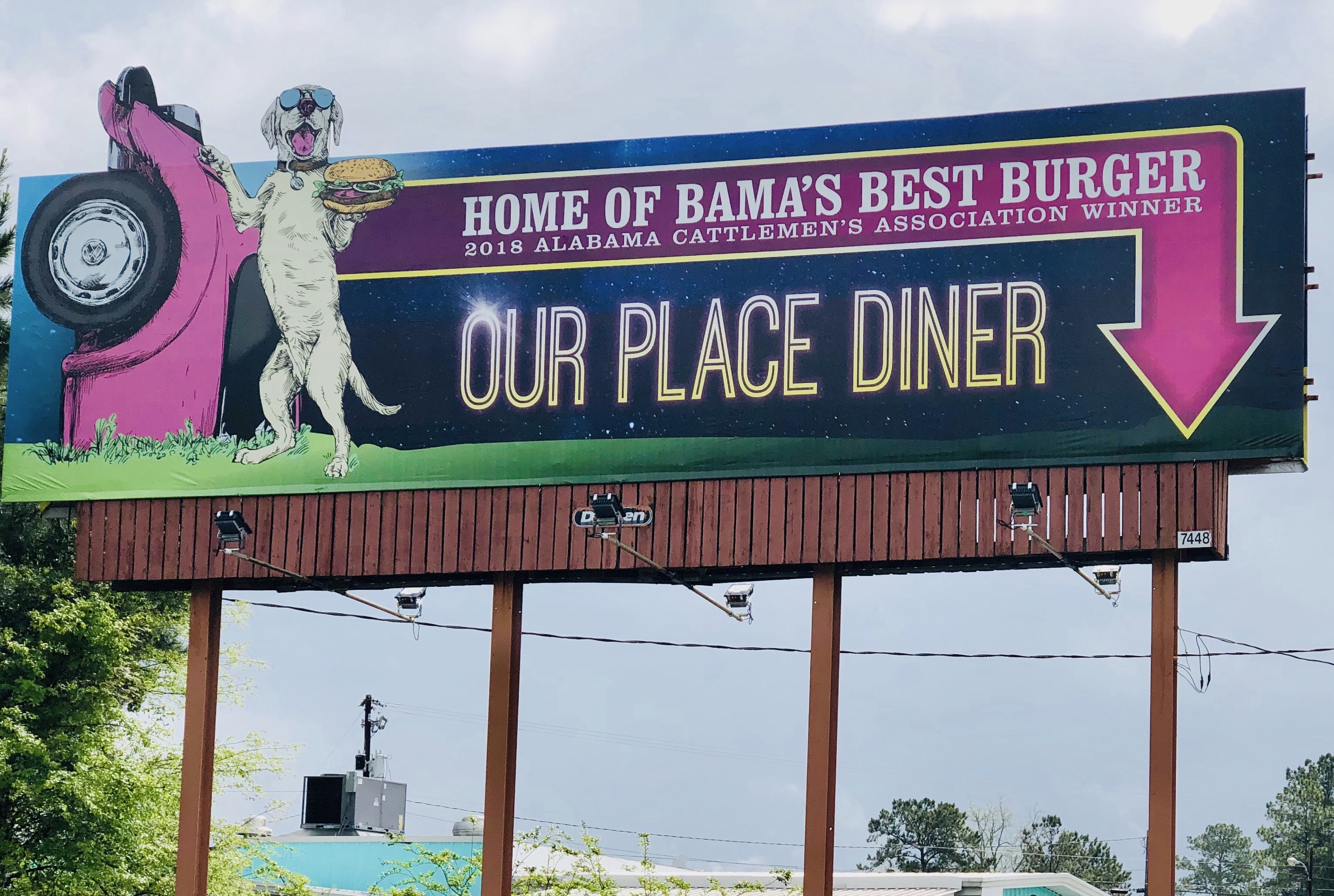 In most cases, a bug and a restaurant do not go together. In fact, while dining out, the last thing that you would want to see is a bug….except when you are at Our Place Diner! Over the years, Our Place Diner has become a Dale County landmark. Located on Hwy 231 in Ozark, AL, the restaurant boasts an actual Volkswagen Beetle (Bug) sticking out of the ground. With oversized portions, a large menu variety and a shrimp po’ boy that won’t wait, you’ll find Our Place Diner overflowing with southern charm. Their friendly staff is always ready and willing to wait on you.

Our Place Diner selected a bulletin just north of their restaurant to encourage people to stop by and to promote their burger that was voted “Bama’s Best Burger 2018”  by the Alabama Cattleman’s Association. They have had such great response from the billboard that they are looking to add an additional billboard just south of the restaurant in the near future. 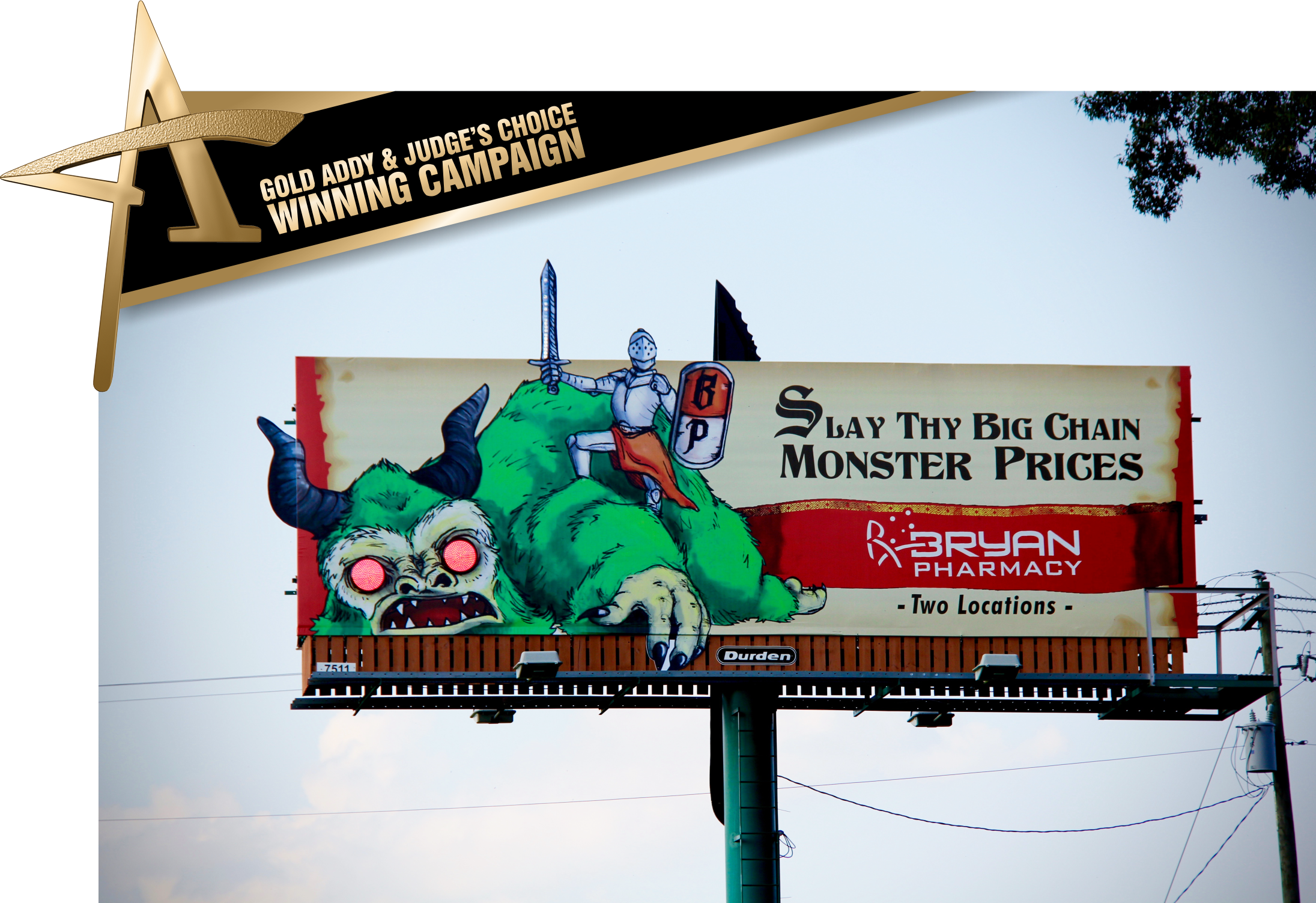 Sometimes to find a something new and fresh you have to look to the past. Bryan Pharmacy was ready for a campaign overhaul after their Award-Winning Ninja Campaign. We knew they wanted something epic, and nothing quite compares to the legendary tales of knights fighting monsters and saving the everyday folk. From this spark of idea came, Sir Bryan the Defender of your Health. 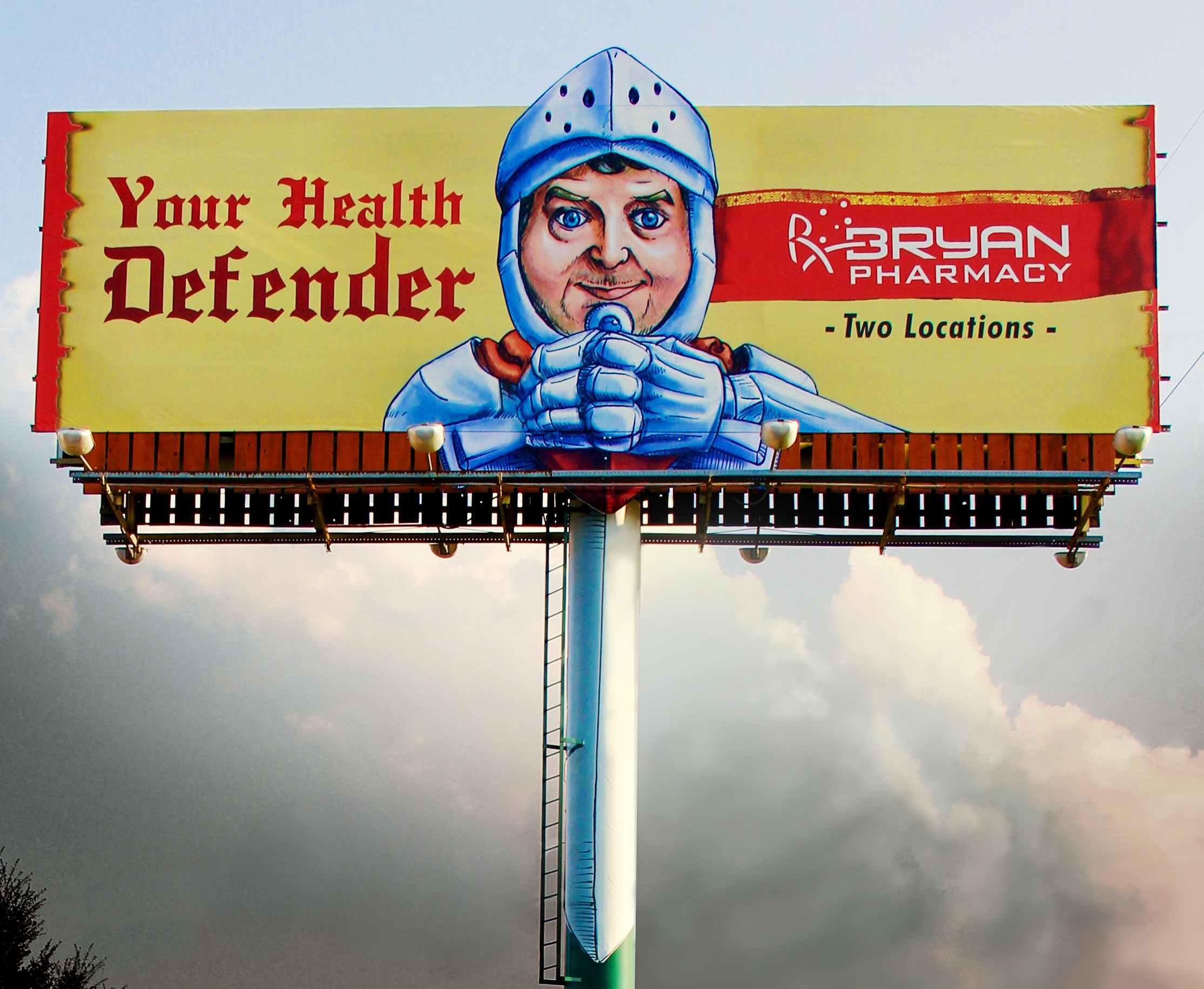 After the initial concept came together and our client gave their support, we were able to expand upon the idea. The knights of old defended the greatest treasures as well, none greater than the legendary Holy Grail, a symbol of purity and an icon of greatness. Bryan Pharmacy is not only a defender but a pinnacle of health care. Also, the imagery of a grail as a mortar and pestle goes hand-in-hand. 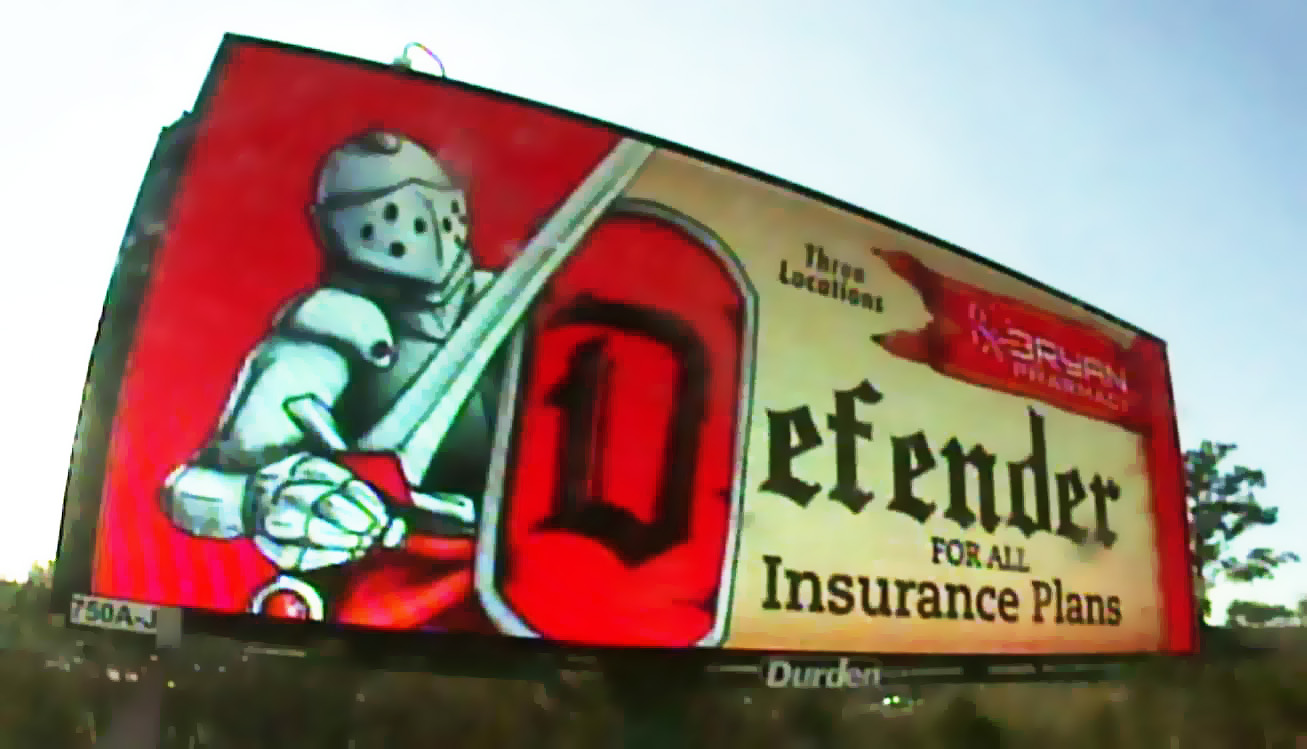 After we established the Holy Grail as a major symbol in the campaign we also circled back to the image of knight, valiantly fighting against disease, discomfort, and the high prices and wait times of big chains. We wanted the owner, Brett Bryan, to be introduced as Sir Bryan, with an illustrated portrait of him as the Health Defender. We also found we could include a sword that would stand below the billboard on the billboard’s pole. 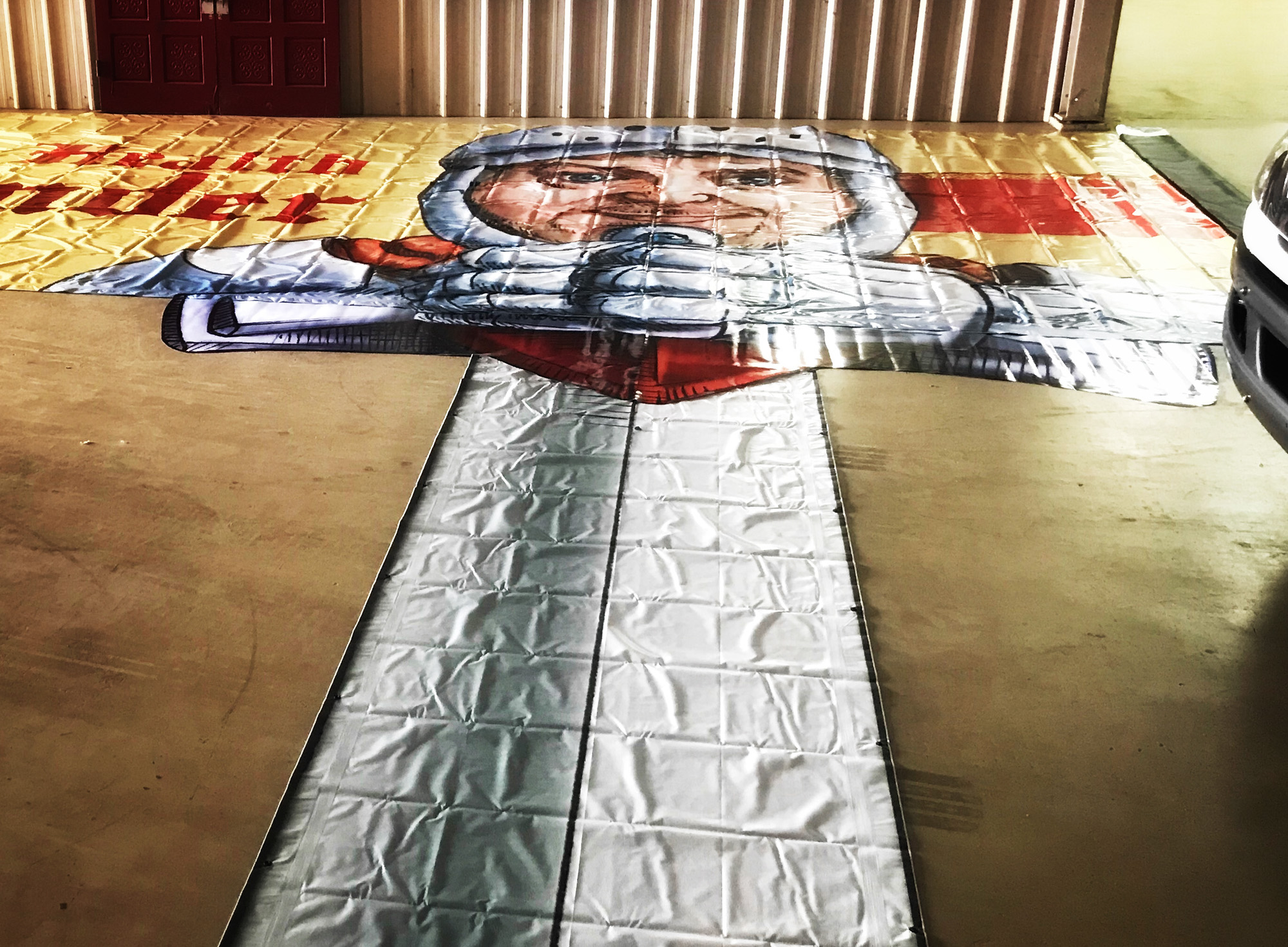 Another message that Bryan Pharmacy prides themselves in, is their competitive prices against the big chains. To fit the medieval fantasy theme, we placed the big chains as a monster to be slain by your local pharmacy defenders. Altogether, this project was a great exploration of how local businesses can become larger than life and stand strong against the onslaught of big chains and outside influence. Bryan Pharmacy has been in business since 2003, but they continue a tradition of fighting against sickness that has only grown over the centuries. Find out more about Bryan Pharmacy at their website https://www.bryanpharmacy.com/ 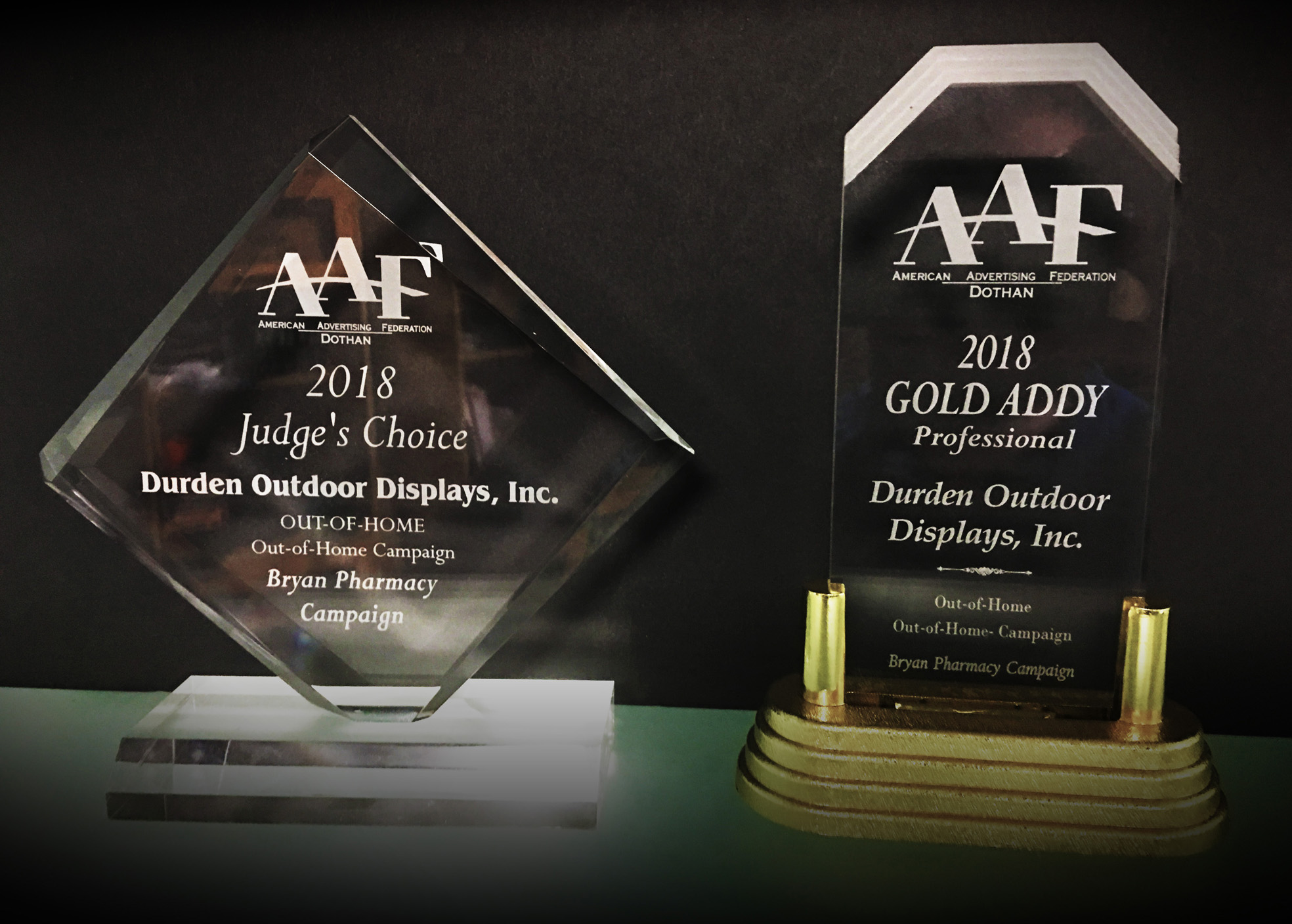 Not only has this campaign been a great success for Bryan Pharmacy, but it has continued the legacy of ADDY wins for Durden Outdoor. This campaign was a GOLD ADDY winner as well as the 2018 JUDGE’S CHOICE winner.
https://www.durdenoutdoor.com/wp-content/uploads/2016/06/DUR-Footer-Logo.png 0 0 dur_admin https://www.durdenoutdoor.com/wp-content/uploads/2016/06/DUR-Footer-Logo.png dur_admin2019-03-04 18:30:152019-03-04 18:30:15Hear Ye! Hear Ye! Sir Bryan’s Pharmacy Is Your Health Defender In Enterprise!
Have you ever opened your web browser only to be bombarded with an instant barrage of ads? Pop-ups, videos, and surveys all fighting for your attention trying to drive traffic to their website. Chances are it’s a daily occurrence and chances are even better that only a small percentage of these ads are memorable to us as an audience. Forbes digital marketing experts estimate the average American sees or hears 4,000-10,000 ads per day.

As a brand, how does one most effectively navigate these over saturated waters to connect with potential consumers? You flip the script and get outside. Out Of Home (OOH) advertising is currently one of the fastest growing mediums on the market and ironically enough, even the largest tech companies like Apple and Google are taking note.

According to a recent Nielsen study, billboards boast some pretty admirable stats: 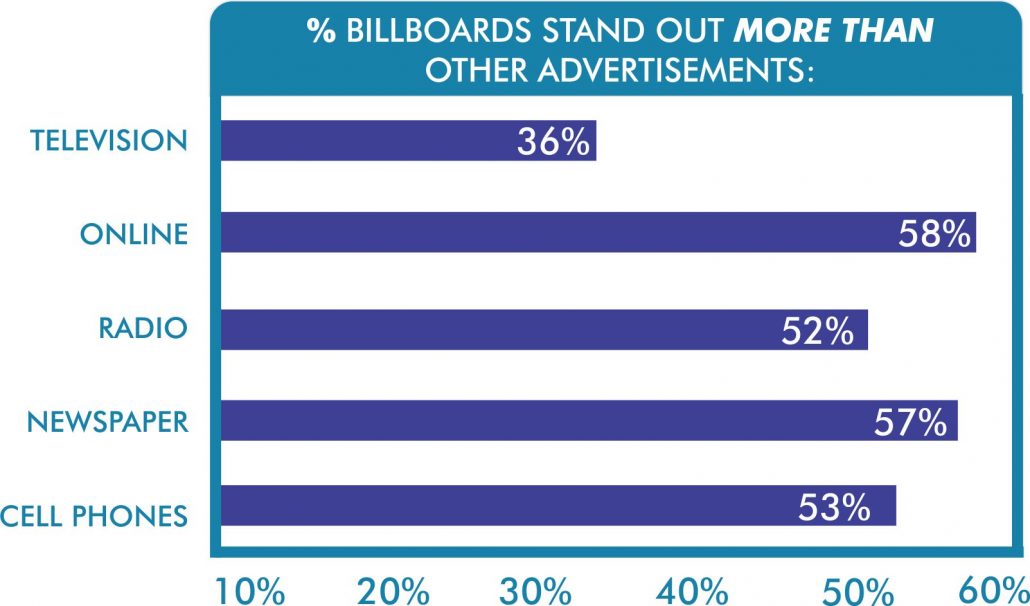 Thanks in part to the onslaught of digital noise, OOH has once again proven itself as the best bang-for-your-buck marketing tool. At a fraction of the cost of traditional media, the OOH return on investment is quite impressive. According to a Hustle article- “Radio, print, and television ads have declined in prominence, but OOH ads have enjoyed 31 consecutive quarters of growth, and a 35% increase in ad spend since 2010. By 2021, billboards are expected to grow to a $33B industry.”

They say what is old is new again and the “old-school” billboard is most certainly still a powerhouse on the advertising front. Since 1968 Durden Outdoor has been making clients FAMOUS and we are happy to see current trends reflect what OOH advertisers like us have known all along. If you are interested in increasing your brand’s bottom line contact one of our sales associates today!

https://www.durdenoutdoor.com/wp-content/uploads/2016/06/DUR-Footer-Logo.png 0 0 Martin Whaley https://www.durdenoutdoor.com/wp-content/uploads/2016/06/DUR-Footer-Logo.png Martin Whaley2019-02-06 19:45:412019-02-06 19:45:41No Ad Skipping Here
The Vance Law Firm wanted to make a statement targeting traffic leaving Pike County, AL headed northbound to Montgomery County, AL and the FAMOUSMakers had the perfect solution to help reach their audience. Just north of Troy, AL we utilized two bulletins that are directly across the road from each other. After having this idea for some time, we knew we wanted the two billboards to work together to tell a visual story. Featuring an arm in a cast and telephone, we used the left-hand read billboard to ask the question, “Injured?” and point drivers across the street to the right-hand read billboard where Stewart Vance, Attorney & Owner, is showcased instructing drivers to “Dial 3 for Me.”

Stewart Vance concentrates his practice in the areas of personal injury, wrongful death and product liability. He represents those that have been injured in an automobile or other accidents; have suffered severe injuries or death from defective products; or who have had loved ones suffer from nursing home neglect and abuse. The Vance Law Firm has a team of attorneys ready to fight for you. Backed by the “V-Guarantee,” it’s no wonder The Vance Law Firm has been voted “Best Law Firm in Montgomery” for five years in a row. Give them a call today at 334-333-3333 for a Free Case Review.